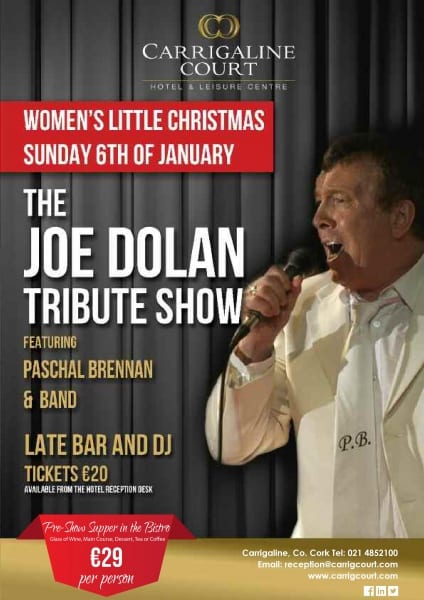 The party won’t stop after the show ends, as we’ll have a late bar and DJ to keep you entertained into the night. Perhaps you’d like to book in and stay for the night also?

Paschal is currently touring with The Joe Dolan Tribute Show, where he appears alongside six other musicians. He is also joined occasionally on stage by his daughter Aimee and other special guest entertainers from across Ireland. After the success of “The Prayer” in early 2009 Paschal then released a Robert Da Nova penned single called “Suzie Loves You No More”.

Paschal’s latest album Titled “The Looking Glass” 2010 Featuring songs from the Joe Dolan Tribute show with 13 popular songs, including You and The Looking Glass, Good-looking Woman, Tar and Cement. Paschal’s own single “Suzie Loves You No More” is also on the album as an added treat.  All of Paschal’s albums & singles are produced & arranged by Willie Dunne & Paschal Brennan, and all are available for purchase.