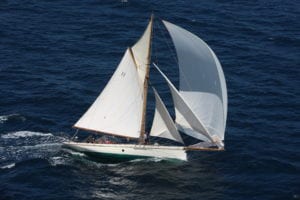 In 2020, the Royal Cork Yacht Club in Crosshaven will celebrate its 300th anniversary with an exciting series of events on and off the water across Cork harbour, called Cork300.

Where it all began, and Cork’s maritime haven, with a series of events next summer.

Founded in 1720, by a group of 25 pioneering individuals, the Royal Cork Yacht Club is the oldest yacht club in the world, and its tricentenary celebrations will take a look back at the origins of ‘where it all began’, which is attracting significant international interest from thousands of yacht clubs across the globe.

Sailing communities throughout Europe and as far as Australia, Hong Kong and San Francisco are expected to attend the Cork300 celebrations – which will take place primarily during the months of July and August 2020 – to participate in the exciting variety of competitive and non-competitive nautical and on shore events scheduled, many of which are also open to the public. As part of the celebrations, communities across Cork harbour will host a vast array of sailing, racing, food, and entertainment events, along with a number of talks, ensuring Cork will be the only place to be in Summer 2020.

The Cork300 summer celebrations, which will be preceded by several other events including European Maritime Day and Seafest in May, will centre on three lead events: The Great Gathering of cruising yachtsmen and yachts from around the world in July, Three Championship Weeks of competitive dinghy sailing in August, and The Club At Home Regatta for all fleets, also in August.

Highlights over the summer include an eye-catching Classic Yacht Regatta; the historic Kingstown/Queenstown feeder race from Dun Laoghaire to Cobh; the world-famous annual Volvo Cork Week Regatta, an International Powerboat Championship Festival which will take place in Ireland for the first time; a Wild Atlantic Way sailing ‘cruise in company’ for visiting yacht clubs; the Royal Cork Fleet Review which will be a fantastic parade of sailing craft in Cobh.and a Gathering of Naval Ships in Cork City. The prestigious Morgan Cup, awarded by the Royal Ocean Racing Club (RORC), will also come to Ireland for the first time as part of Cork300.

The Royal Cork Yacht Club have also just received confirmation that His Royal Highness The Prince of Wales, has graciously donated a specially commissioned trophy for a unique race from Cowes in the UK to Cork to celebrate the Royal Cork Yacht Club’s tricentenary celebrations and the special relationship that exists between our two countries and sailing communities. The trophy will be awarded to the line honours winner of the Morgan Cup race in 2020, which forms part of the Royal Ocean Racing Club’s Season Points Championship and starts from the historical Royal Yacht Squadron line in Cowes.

Commenting on the Cork300 events series, Chairman of Cork300 Colin Morehead said, “I am incredibly proud to be Chairman of Cork300 – this is probably the most significant historic milestone that the Royal Cork Yacht Club and the sailing community worldwide will see in our lifetime, so it truly is an honour to be part of … and to share where it all began.

“Everyone, everywhere around the world, is invited to join in the celebrations and be part of the Cork300 crew. We have a really exciting events series planned with lots of more news to announce over the coming months.
“We are especially delighted to hear of His Royal Highness, The Prince of Wales’ support this week. This truly is an honour.”“Cork300 will promote community, international friendship, sustainability and the role of sailing worldwide. We want to inspire and motivate future generations to sail and we hope to leave a legacy for sailing and Cork harbour, Ireland’s maritime haven, into the future.”
“Of course, Cork300 is made possible only by the support of our partners – AIB the premier partner, Volvo, Port of Cork, Cork County Council, Cork City Council and Heineken, so we would like to sincerely thank them for their generosity.”

Also commenting, An Tánaiste Simon Coveney T.D. said, “Cork300 is a momentous event for the Cork region. In my view, it will be the most significant maritime event in Ireland in our lifetime. Cork300 is already attracting significant international interest and will firmly position Cork as a maritime haven and must visit destination for anyone involved in sailing worldwide. The committee have put a huge amount of work into planning what looks like an amazing schedule of events across Cork harbour in summer 2020, and I would encourage everyone to get involved – be part of the crew.”

Colin Hunt, Chief Executive Officer at AIB, the premier partners for Cork300, said, “AIB is delighted to be sponsoring Cork300 and helping bring what will be a momentous event to the city next summer. As a bank, we have deep roots in Cork and have been part of the community for well over 100 years which is why we are proud to be backing something which brings communities from all over the globe together in one place.”

The current Cork300 schedule of events:

Cruising yachts from across Ireland, Europe and around the world will start gathering in Cork Harbour for the Cork300 Great Gathering. In addition, The Irish Cruising Club will host a cruise from Howth Yacht Club in Dublin down the East coast through Ireland’s Ancient East to Cork. Day trips will be organised at key tourism spots.

Cowes to Cork Race, The Morgan Cup, 8-10th July to include trophy generously donated by HRH The Prince of Wales

Presented by the Royal Thames Yacht Club the Morgan Cup forms part of the Royal Ocean Racing Club’s Season Points Championship. More than 100 yachts are expected to depart from the Royal Yacht Squadron line off in Cowes in the UK on July 8th to commence a challenging offshore race to Cork. The Trophy donated by HRH The Prince of Wales will be awarded to the Line Honours winner who is expected to arrive in Crosshaven on 10th July. Hosted by the Royal Ocean Racing Club, the Royal Yacht Squadron and the Royal Cork Yacht Club, the Morgan Cup trophy will be awarded to the winning crew on handicap under IRC Rating.

The historic Dublin to Queenstown Cork race will take place from Kingstown (Dun Laoighaire) to Queenstown (Cobh), with boats arriving to the finish line at the Sirius Centre in Cobh (a former club house of the Royal Cork Yacht Club) on the evening of Friday July 10th. The Kingstown to Queenstown race was first held in 1860 and was the first ever ocean yacht race to take place in Great Britain.

During the Classic Yacht Regatta, Classic yachts will race within Cork harbour, with large yachts racing outside the harbour, which will be a fantastic sight for all to see from viewing points on Camden Fort Meagher and Crosshaven.

Three very different powerboat events, organised by Powerboat Ireland, will take place in Ireland for the first time ever on 11th July as part of Cork300. Spectators will have the opportunity to see classic boats from the past mix with solar and alternative energy boats of the future. Alongside these boats will be a modern fleet of endurance offshore racing boats who will compete for the honour of being crowned UIM Offshore Marathon World Champion. In addition, the UIM Long Distance World Record “Cork – Fastnet – Cork” awaits any team that wishes to take on the challenge.

Royal Cork Fleet Review and fantastic parade of sail with all types of sea craft will take place in Cobh between the Sirius building in the town centre and Haulbowline, which were both former club houses of Royal Cork Yacht Club.

Following the Royal Cork Fleet Review, up to 100 cruising boats will set sail on a multi-stop ‘cruise in company’ tour around the south west coast of Ireland, with ports of call in Kinsale, Glandore, Baltimore, Schull, Bantry Bay and finally Dingle. Events will be scheduled along the way in conjunction with other yacht/sailing clubs.

The biennial Volvo Cork Week Regatta is always a highlight on the sailing and Cork social calendar. 2020 will incorporate events including the Beaufort Cup for military and emergency services crews and the 1720 European Championships. The world-famous regatta will also include nightly crew parties, ticketed public party nights with live musical entertainment, and a Ladies’ Day charity lunch event.

The established Glandore Classic Regatta was postponed in 2019 in order to coincide with Cork300 in 2020. This year’s event is set to be the largest yet as outstanding classic boats from around the world flock to the famous West Cork coast.

Three Championship Weeks will take place at Royal Cork Yacht Club for sailors from across Ireland and around the world.

Week 1 from August 2nd – 7th will host a number of dinghy class championships lead by the Clubs three-person National 18ft Class, a fleet with legendary stamina both on and off the water, including the National 18s – Cock of the North Trophy.

Throughout these weeks, the village of Crosshaven will host a wide range of on-site social activities and entertainment for all participants and their families.