In the last 1,300 years, Spike Island in cork has been home to rioters and redcoats, captains and convicts, monks and monasteries, and sinners & saints.

The island was a site for holding prisoners back to Cromwell’s time but it was in at the height of the Great Famine in 1847 Spike Island became a full-scale prison. Life on the inside was grim, with those guilty of misconduct or branded dangerous offenders – often 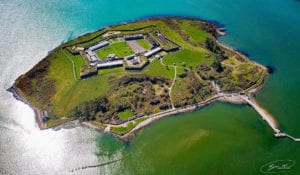 political prisoners, murderers, and violent thieves were held in solitary confinement within a purpose-built punishment block. They were heavily chained, often to the wall of their cells; slept on cold, damp stone floors; and clothed in black from head to toe – including a hood with only narrow slits for eyeholes. Prisoners not held in solitary confinement were crammed 12 to a cell.

The Spike Island is dominated by the 200 year old Fort Mitchel, well known for its Star shaped fortress. It was the largest prison in the world at the time and there has never been a larger prison in Ireland or Britain before or since.

Our Spike Island Hotel Packages are of great value with Full Irish Breakfast. Get exclusive discounted tickets for Spike Island when you stay by the nearby Carrigaline Court Hotel.

Book Direct for the Best Rates!

The Carrigaline Court Hotel is only a short drive away, where you then aboard a ferry for only 10 mins!

For inspiration on things to do in Cork, visit our Breaks Page

The fort was designed and built by General Vallency, a famous character of his time who was an excellent engineer, an early Irish historian and he also had 4 wives and 14 children!

How do I get to Spike Island?

How long is the Ferry from Spike Island to Cobh?

The ferry journey is just 10 – 17 minutes each way

How long is the Spike Island Tour?

Included in the price of your ticket is a fully guided tour from the ferry to the Fortress, lasting up to 1 ¼ hours.

How Far is Spike Island from the Carrigaline Court Hotel?

The Distance between the Carrigaline Court Hotel and Spike Island is 7km!